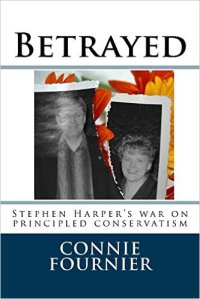 Various people have asked me why I will not vote for Stephen Harper and the Conservatives in this election. While the Cons’ failure to seriously tackle the deficit, reduce the size of government and begin to dismantle the Liberal state are all good reasons, I probably would hold my nose one more time if it were not for one, fundamental fact: C-51. And I might have even given Harper a pass on C-51 if I didn’t know the Conservative record on free speech, the perversion of the Human Rights Commission and the legal thuggery which attended it.

Connie Fournier and her husband Mark are not going to be voting for the Harper Conservatives either: Connie has detailed her reasons in Betrayed: Stephen Harper’s war on principled conservatism.

Full disclosure: I’ve met Connie and Mark once and I provided an affidavit in their defence when Dr. Dawg sued them for libel (a case which they won at great personal expense). Connie and I chat on Google and, in so far as it is possible to have friends you only chat with on the internet, I’d like to think Connie is one of mine.

The Fourniers are ordinary, middle class Canadians – Mark drives long haul trucks, Connie was a homeschooling stay-at-home mum – who were politically involved as far back as the Canadian Alliance. They started a website called Free Dominion in 2001 where conservatives of various sorts could post topics and comments and have a good time arguing among themselves.

It was a very successful site and with that success came a degree of notoriety and, inevitably, more than a few cranks. Free Dominion saw itself as the voice of “principled conservatism” which, in those bygone days was a thing. The Canadian Alliance, successor to Preston Manning’s Reform Party, had seats in Parliament and the right wing wars between purists and pragmatists were just getting underway.

Back in 2001 the power of the internet was barely understood by the political operators in any of the mainstream parties and well beyond the comprehension of the pundit class of the long entrenched Toronto media party. Here were these nobodies, people who had not gone to the right schools, who didn’t see abortion, immigration and homosexuality as part of the “Canadian consensus” and therefore no longer topics of polite conversation, who thought the “science” of global warming was not “settled”, who didn’t reflexively hate the United States, tended to be pro-Israel and found Muslims problematic, who thought government should actually shrink rather than grow less slowly – and these tacky people had thousands of other, likely equally tacky, people coming to their site every day. The internet was facilitating dissent. (The left was having problems of its own with its more doctrinaire elements chatting among themselves at the appropriately named forum “Rabble” created by perennial malcontent, Judy Rebick.)

Other conservative sites arose and there were plenty of conservative bloggers – some were CPC aligned, others were fiercely independent. While dead tree media was more than happy to cover the Harper’s CPC as it did battle with the Liberals, NDP and Bloc, the idea that there was a dissident group of “principled conservatives” was easy for the media to ignore. However, from time to time, in other contexts, Free Dominion would be mentioned and inevitably attract labels like “far right”, “right wing extremist”, “fascist”, “racist” or, occasionally, “neo Nazi”.

2001 was notable for another reason. S.13 of the Canadian Human Rights Act, designed to deal with “hate speech”, was extended to cover communications on the internet. This had two effects: first, it allowed the Canadian Human Rights Commission to hear complaints about alleged hate speech, second, it somehow engaged so called investigators at the Commission in ferreting out this “hate speech”.

Free Dominion became – officially – a CHRC target on or around April 5, 2006. That was the day an account called jadewarr was registered. Ironically, as Connie points out, two months after Stephen Harper became Prime Minister for the first time.

The jadewarr account became notorious in a series of CHRC hearings. It was an account to which several CHRC “hate crimes” unit employees used to investigate complaints against particular websites.

But here is the key thing: at the time “jadewarr” registered as a member of Free Dominion there was no complaint registered with the Commission about Free Dominion. A secretive unit of a government agency had taken it upon itself to “investigate” a perfectly legitimate website without the slightest legal authority to do so. Connie and Mark got busy as they learned more about this illegal investigation and they filed Privacy and Freedom of Information requests to obtain the CHRC’s files on Free Dominion. They were stonewalled.

Betrayed gives chapter and verse on the Fournier’s harassment at the hands of the “hate crimes” unit of the CHRC. Unfortunately, for legal reasons they have to leave out the guiding mind of that unit, the revolting Richard Warman. But here is the real rub – this illegal harassment and unlawful stonewalling went on under a Conservative government. Worse, that government – in another case – was perfectly prepared to defend the right of the Commission to enforce s.13. And, worse than that, the Conservative government was unwilling to repeal S.13. In the end S.13 was repealed by way of a private members bill.

In the great world of intelligence and security, the “hate crimes unit” of the CHRC was pretty small potatoes. Their hate sniffer in chief and pretty much solitary complainant had very limited power. (Though his use of that power was described by Tribunal Chair Edward Lustig as “disappointing and disturbing”.)  But the fact was that the management of the CHRC was certainly aware of the actions of their hate crimes unit. They were certainly aware of the outreach that unit had made to assorted police departments. The climate of lawlessness in pursuit of basement Nazis and cranks was at least tacitly sanctioned at the politically appointed, Chief Commissioner level.

The Conservative Cabinet and Stephen Harper did nothing to stop or even rein in the CHRC.

So the question which Betrayed raises is simply this: if the Conservatives under Stephen Harper were willing to allow the gross abuse of process which surrounded the persecutions under S.13 of the Canadian Human Rights Act, how can they be trusted with the much more serious powers C-51 would grant them? When you have read Betrayed I suspect you will agree with Connie and Mark that the Conservatives or the Liberals or the NDP must not be given those powers.

Connie and Mark were put through the wringer by the CHRC and sued by Richard Warman in his own name. Even poor John Baglow, aka Dr. Dawg was stupid enough to file a libel claim which he lost, by way of piling on. Apparently Free Dominion represented such a threat to the left/liberal consensus in Canada – which Stephen Harper has eagerly embraced – that it had to be spied upon, hauled before the Commission and lawfared into submission.

Though it all, Connie and Mark have remained remarkably calm. Betrayed sets out the facts of Free Dominion’s betrayal. It outlines the hypocritical pragmatism of the Conservatives and it shows why no political party should ever be entrusted with the powers of C-51.

Remarkably, as the lawlessness and shabbiness of Free Dominion’s and principled conservatives treatment at the hands of the CPC is recited, there is not a bitter word in Betrayed. No invective, no personal attacks – Connie’s gift in Betrayed is a complete lack of rancor. Which makes Betrayed all the more powerful.

Update: Xanthippa who has attended the many vexatious trials of the Fourniers has a review up of Connie’s book. Typically, Xan cuts right to the chase. Go read it.