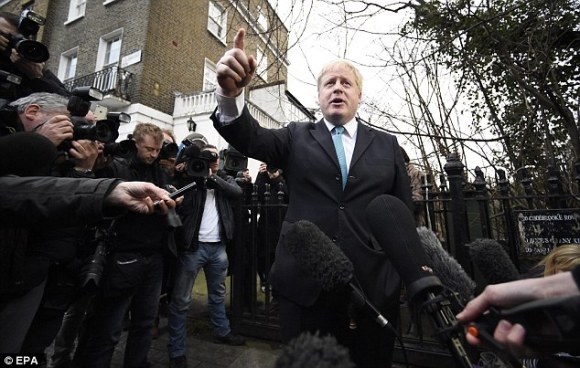 Boris Johnson threw his support to the “Out” campaign in England’s referendum on exiting the European Union today. In a stroke he added legitimacy to Brexit, dismissed the wet Tories under Cameron’s weak leadership and positioned himself as the next Prime Minister of England in the event of an “Out” victory.

Perhaps more importantly, Johnson underscored a revulsion with establishment, business as usual, squishy middle politics which has been occurring all over the world.

The rise and rise of Donald Trump and the collapse of the Republican Party establishment is one manifestation of this. But, more interestingly, the challenge mounted by Bernie Sanders – seemingly quixotic – has rattled the Democratic Party establishment. Unlike the Republicans, the Democrats have an effective firewall in the form of super-delegates to push Hilly over the top; but the fact she is being so effectively challenged from what, in America, could be termed the radical left has been a shock. (It will be even more of a shock if Obama does the right thing for once and lets Hilly be charged with the crimes she so obviously and selfishly committed against the national security of the nation she was sworn to protect.)

On the left in England all of the candidates of the squishy center, whether Brownian or Blairite, went down to total defeat at the hands of Jeremy Corbyn and a rabble roused in its hundreds of thousands.

In each case, and there are more examples in Europe with assorted outre parties of the left and the right running up significant voting and polling numbers, what has happened is that large numbers of ordinary people are no longer content with the “offend nobody, do nothing” approaches of mainstream politicians.

What, precisely, was the trigger for this insurgent attitude varies from nation to nation and party to party but my own sense is that unfettered immigration played a huge role in focusing discontent. At least it did on the right. As well, the sense that the office holders were unwilling to stand up for much of anything created the conditions in which Corbyn, Bernie and The Donald could flourish. Finally, the bien pensant‘s endless attempts to shut down debate about immigration with accusations of racism have not been appreciated.

Watching the lines of migrants snaking through the Balkans or landing in Italy or flooding the Southern United States has not gone down well with people who are already struggling to make ends meet. For the English, the Blairite/EU project of largely open immigration has meant that schools, hospitals and benefits programmes have been overwhelmed. Housing has become hard to find. For the Americans, Obama’s abandonment of the enforcement of the southern border has raised the question of just how many people America can absorb on a yearly basis. And it has also raised the question as to whether America should be selective about who it lets in. Again, when the middle class is being hollowed out by economic forces apparently beyond the control of Washington, putting out the welcome mat to millions of migrants is not attractive.

At the same time, the office holding establishment’s dismissal of these concerns as racist or ignorant or both is a stone in the shoe of many voters on the right. While on the left, the unwillingness of the office holders to make a principled case for a more welcoming immigration strategy for fear of alienating the more traditional working class voters destroyed their legitimacy in the eyes of the activist, progressive and very vocal minority. A Saunders or a Corbyn, while they may not have much appeal for the general electorate, are rallying points for the anti-racist, anti-facist, anti-white, anti-Christian, anti-Isreal progressive core in both the Labour and Democratic parties.

At the height of the Middle Eastern refugee hysteria, a poor little boy was washed up on a Greek island. Like a reflex hammer, the sad little child caused every leftie knee in the world to jerk and jerk hard. Suddenly the left at large was demanding “action”. Even the squishy middle seemed to think that “something must be done”. Then, a few months later came first Paris and then Cologne. Oddly, in terms of reaction, I think the rapes and gropings in Cologne were more significant than the slaughter in Paris. Paris was the work of “terrorists” and only tangentially – in so far as several of the perpetrators were carried in on the tide of refugees – related to the migrant crisis.

Then, a few months later came first Paris and then Cologne. Oddly, in terms of reaction, I think the rapes and gropings in Cologne were more significant than the slaughter in Paris. Paris was the work of “terrorists” and only tangentially – in so far as several of the perpetrators were carried in on the tide of refugees – related to the migrant crisis.

Cologne was different. The rapists and the gropers were not “terrorists”; they were plain, ordinary, Muslim migrants. The Germans and, rather quickly the rest of Europe, woke up to the realization that letting millions of people from an alien – if not actively hostile – Muslim culture into your country was going to have big consequences, mostly unpleasant. They also realized that their government was pretending otherwise and, perhaps worse, attempting to censor the media and the internet to keep their citizens ignorant of the real costs – social, cultural and economic – of migration.

In England the EU referendum is very likely to turn on how best to keep the migrants on the other side of the English Channel. Cameron is pitching European co-operation in the face of a Europe-wide crisis. The Outies will say that until and unless England reasserts real control of her borders, Europe’s migrant crisis will become England’s problem. (And, of course, the leftie luvvies will yell “Racist” and will, I suspect, be ignored because overuse and misuse has rendered that term nugatory.)

In the United States the Trumpian Wall is and will be “Yuge”. It is a concept which will attract support from large numbers of non-elite Republicans and, I suspect, large numbers of working class Democrats who are sick of the endless stream of illegal immigrants clogging the social systems they depend on. Major media and the official Democratic party will continue to pretend that only racists object to unfettered immigration. A position which will alienate the white working class and, if Trump is skillful, annoy the struggling black and Hispanic populations. (Saunders, meanwhile, will have the bully pulpit at the Democratic Convention to decry the inhumanity of deportation of illegal immigrants. A position unlikely to sit well with people who live a little closer to the Mexican border than Vermont.)

Perhaps the most important thing which seems to be happening on the left and the right is that people are willing to look at radical action rather than meandering along the pointless path of the status quo. I may think Corbyn is a dangerous lunatic but I also think that he stands for something rather than nothing. Saunders has a healthy dose of the crazy old left wing uncle about him but he too stands for something no matter how impractical. The main objection to Trump is that he is a vulgarian with only a very limited understanding of the nuances of politics. Which may be true; but many voters may prefer that to the warmed over meatless gruel served up by his competition.

Boris Johnson, old Etonian, journalist, Mayor of London has cultivated an image as an endearing, deeply English, buffoon who rides his bike around London getting into scraps. He is, of course, a very sophisticated politician who can read the signals and gauge the political mood as well or better than Cameron. He is placing a huge bet that the English have had enough of rule from Brussels and that the grossly incompetent handling of the migrant crisis will push them over the edge to Brexit. If he is right Cameron will almost certainly have to resign and any member of the British Cabinet who supported the “Inners” will be disqualified to run for the leadership simply because they will be open to the charge that they cannot be counted on to properly negotiate the terms of Britain’s exit. That leaves the Leadership between Boris and Michael Gove and that, I suspect, is an easy win for Boris.

The next few years are going to be about a fundamental political realignment. The current stock of politicians are going to be kicked to the curb by populations unwilling to let their nations be overrun by people with whom they share nothing in common.

One thought on “Mad as Hell…”