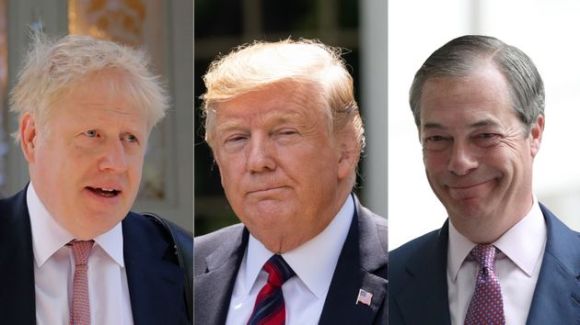 Much outrage at the leaked cables of the British Ambassador to the United States, Sir Kim Darroch. The Intercept, bless its crusading heart, suggests that the cables may have been leaked to force the replacement of Sir Kim with a more Brexit friendly Trump whisperer. Which may be true. But if you want to go deep consider this.

Boris Johnson is about to win the leadership of the Conservative Party and with it the Prime Ministership. Unfortunately for Boris, our old pal Nigel Farage has whipped up a Brexit Party which will almost certainly take enough seats to produce a Tory, or, God forbid, Labour minority. Nigel is the Brexit Party as he was UKIP and he is a real problem for Boris.

The one position on Earth which Nigel Farage wants is to the Her Majesty’s Ambassador to the United States.

Now Boris who for all his looney behaviour is no one’s fool needs to nobble Nigel without actually appearing to do so. Dangling the plum of the Washington Embassy in front of Nigel’s, easily turned, head might be just the thing to get Nigel to come to a deal on terms favourable to the Johnson Conservatives. (Basically, run hard in Labour held Brexit supporting constituencies and go easy on all but the most remoaner Tories.) Nigel gets Brexit and a seat at the table in Trumpworld. Boris gets to be the Prime Minister in full without having to worry too much about the Brexiteers going a little bonkers every so often.

So who leaked the cables?