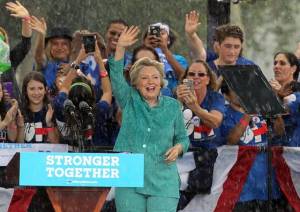 Hillary Clinton needed to do only a few things well to beat Donald Trump. She needed to put the email scandal to bed. She needed to motivate black voters to show up and vote. She needed to stay out of Trump’s way as he bumbled and lurched along the campaign trail.

A few days before Election day it is not at all clear that she has succeeded in doing any of these things.

A thoroughly professional political operation would have made it its business to know where Hilly’s emails might be. Not where they probably were, rather where they might possibly be. Weiner’s laptop is an odd place for 650,000 emails to have ended up but it was certainly a machine which should have been considered. It wasn’t.

As importantly, the HRC campaign never really came up with a solid message on the emails. Especially the deleted emails. Blaming Russian hackers never got to the bottom of why Hilly caused so many emails to be deleted when they were subject to a Congressional subpoena. And the campaign had to have realized that some of the erased emails would probably be found on other machines. Given that vulnerability it made no sense at all to break the law by having uncleared lawyers vet the trove. What would have made more sense would have been to turn over all the emails – yoga classes and wedding plans and all. Why was this not done? Realistically, because there are some emails in that trove which are ugly if not actually criminal.

No question that the Comey intervention pretty much destroyed the HRC campaign attempt to move on after Comey’s earlier non- exhoneration. But the campaign itself needed to tell a better, more complete, story from the go and it didn’t. That hurts among the undecided because it gives substance to the “Crooked Hillary” narrative. It also hurts in the ranks of committed Democrats. Not because they will suddenly vote Trump, rather because they lose motivation to vote Hilly.

Black turnout is part of the story. The nice white lady was never going to have black turnout numbers anywhere near America’s first black President’s; but to win Hilly had to see a fairly minimal drop off. Early indications are that black voting numbers are down but it is not clear by how much. And some of the polls are suggesting that the black people who do go to the polls are not universally voting for Hilly. Sample sizes are tiny but I think it fair to say that low black turnout will be a thing to watch on Election Day. Whether, if it occurs, it will be reported by MSM is an interesting question.

It would not take much for Trump to do better than the last two Republican candidates in terms of attracting black support. Roper reported 93% to 6% for Obama in 2012. Hitting 10% would be a big step forward for Trump. The Washington Post (as of October 13) reports Hilly as holding 79% of the black vote. Which leaves 21% up for grabs.

Hillary’s ability to get out of the way while Trump defeats himself was deeply compromised by two things: first, the spotlight swinging back onto her reckless emailing practices, the Clinton Foundation pay for play outrages, and the ongoing revelations of what a nasty bunch of people correspond with her campaign chair John Podesta. Second, Trump has figured out a script he can stick to in his well attended rallies. Somehow he has managed to avoid chasing squirrels and shiney objects and focus on his message.

All of which is beginning to suggest a total absence of any sort of preference cascade in Hilly’s direction. At best whe can hope that claiming that Trump is “literally Hitler, a Nazi, a fascist, a KKK supporter, a woman hater and a groper” will scare enough voters into voting for Hilly. But I doubt it.

The question is whether people who are no longer fightened of Trump will vote for Trump. There are a good 40% of the voters who actually like Trump and want to vote for him. This election was never about those voters any more than it was about college educated suburban mums.

If there is going to be a landslide, and I think there will, it will be because Hilly’s support is soft and Trump’s is growing as more and more voters realize Hilly is a crook and, long before she is in office, will be the subject of an active FBI investigation. Not voting for Hilly is not the same as voting for Trump and that is why his current strategy of repeating a sunny vision of an America, Great Again, at rally after rally makes a lot of sense.

The people at the rallies are true believers. Many of them have already voted for Trump. But, as the rallies are covered and the message re-inforced by paid media, the possibility of voting for a positive vision of a strong America is going to be more and more appealing to the undecided voters. If you are undecided the choice between voting for someone who is pretty certainly a crook and someone who offers a positive vision for the country is not that difficult. Especially as the attempt to demonize Trump hit peak effectiveness a couple of weeks ago.

Throughout this campaign the Clinton campaign has spent a lot of money on advertising, most of it negative, and not much time putting their candidate in front of the public. My suspicion is that the HRC internals are saying that the more people see Hilly the less they like her. But you can’t beat a populist with a “front porch” strategy. Especially if buckets of mud from your own back yard are constantly being hurled at that porch.

Even with the MSM carrying barrels of Hilly’s water she has not managed to shed her scandals or, more importantly, connect with the American people in a positive way. She might win but I doubt it. Far more likely is Trump winning one of the great upsets.