Heading into the final hours of COP21 – even with the traditional 24 hour extension – it is pretty apparent that:

The amusing part of the entire charade is that, when you look at the world relative to its state in 1992 when the whole climate madness began in Rio, the less developed world has radically developed.

Unsurprisingly, India is none too eager to stop buring fossil fuels and China’s great concession has been to accept unlimited growth in emissions until 2030 when, it really does promise to start reducing emissions.

Whack-a-doodle warmists and greenies will, as per usual, be sad when the Paris Conference ends with a non-enforcable damp squib of a not-a-treaty agreement. The more intelligent of them will be very depressed indeed because the wheels continue to fall of the science as the Pause lengthens, the models depart further from the observations and, oops, Arctic ice extent is the highest its been in a decade. 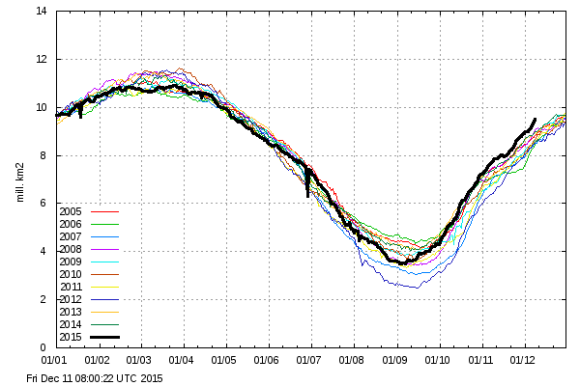 The “science” behind the climate hysteria is crumbling and the green dream of a reversion to horse and buggy days is collapsing faster than the price of oil. The fake consensus is under attack, the models are failing and, despite the great and the good all claiming that we’ll all be baked, the general public has turned away from global warming alarm.

Liberals don’t see failed liberal policies as “failed,” any more than people of faith think that unanswered prayers are “failed” prayers. The difference is that people of faith abnegate themsevles in prayer to a wholly-other divine person, while liberal poster-children subject the world to the narcissistic demands of their own spiritual needs. Jody isn’t the first to make the point. “Remember the war against Franco/That’s the kind where each of us belongs,” sang Tom Lehrer. “He may have won all the battles/But we had all the good songs.” But he makes it in a theologically-informed way that exposes the phemonology of liberal self-worship.

The slaughter in Syria is a minor annoyance to the poster children, whereas peace and prosperity in Israel are cataclysmic disasters. That sounds funny, but it isn’t to the liberals: bringing a liberally-conceived peace to the Middle East is one of those Great Opportunities for Redemption, and to miss it is a tragedy of unimaginable proportions. Darwin forbid that Israel might carry on as a pocket superpower in science, business, and the arts, educating and empowering a new Arab middle class, without submitting to the demands of liberal theology. It’s not only John Kerry who stands to lose his last shot at a Nobel Prize. Liberals of all stripes stand to lose the chance, to demonstrate that particularity (or example, Zionism) is inherently wrong and that liberal universality is right. Spengler, PJ Media

The disaster that is Obama’s flight from the real world no longer even has the virtue that it might prevent war. The Assad regime is back to gassing children , the Russians are playing cat and mouse in Ukraine, there is a full scale civil war in Iraq and the Taliban are simply flowing back in Afghanistan.

And why not? The Rices and the Powers and the excretable Kerrys of the Administration have taken it upon themselves to make America loved rather than feared. To no one’s surprise this has meant America is mocked, ignored and rendered incapable of intervention where intervention is needed. The Syrian red line’s erasure marked the end of the Obama regime’s international credibility.

Unfortunately, there is nothing to do but to wait out the term of this sorry little man and the midgets who surround him. The best America and the rest of the world can hope for is that the damage he is doing is reparable.

Someone is playing checkers

Syria to give up control of chemical weapons.

Do they even play checkers in Russia?

Do the Big 0 and Big, Dumb, John even know how to play checkers?

Sadly, America has been completely outplayed. Kerry should resign citing his own inability to do the job of Secretary of State.