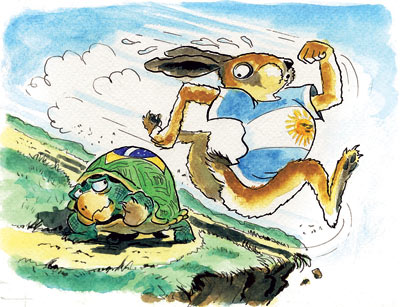 At the beginning of last week, before the State of the Union and before the release of the Nunes memo, the Democrats could still hold out hope that, somehow the not very Presidential Trump would be taken out either by a rather vigorous reading of the 25th Amendment or by Special Counsel Mueller finally finding proof of Russian collusion and then proof that President Trump covered up that collusion in a manner which would attract an indictment for obstruction of justice. These were pretty implausible to begin with, but after a brilliant performance at the SOTU and the confirmation that the FBI/DOJ played silly buggers with the FISA process I think it is safe to say Trump will be serving out his term.

Which is not to say that the FBI/DOJ follies will now be buried. Quite the opposite. The Nunes memo raises more questions than it answers. And other Committees of both the House and the Senate are investigating the FBI/DOJ as well as the State Department. The behaviour of the top echelons of the FBI/DOJ revealed in the Nunes memo and factually uncontradicted suggests that there was a pattern of partisan behaviour which should never exist in a police force or a Department of State responsible for prosecuting the law. And that pattern of behaviour goes well beyond the (Trump) Russian collusion fable. In the first instance, it raises the question of the Clinton Russian collusion. After all, the DNC and the Clinton campaign financed the efforts of a foreign national to obtain information from, well, Russians to compromise an American Presidential candidate. Those Russian individuals were closely tied to the Russian state. And the Clinton campaign and DNC made it their business to push the dossier into the hands of the FBI/DOJ. How all that happened and how to prevent it from happening again is an obvious matter of national interest.

Then we have the emerging, and very queer tale, of the Clinton emails on the Weiner computer and the bizarre spectacle of FBI Director Comey announcing, ten days before the election, that the Clinton email investigation was being re-opened. It appears that now “retired” Assistant FBI Director McCabe had known about the Clinton emails for a month before it occurred to him to tell the Director that there might be a tiny problem. Comey must have been furious but realized that he had no choice but to re-open the investigation. Particularly as FBI agents in New York, as well as NYPD personnel, were aware of the emails. This might appear to be small potatoes however many political observers suggest that the re-opening of the investigation re-enforced the doubts many people had about Clinton and caused more than a few to stay home rather than vote for the likely criminal Clinton. It may not have added any votes to the Trump tally, but Comey’s announcement certainly took a few away from Mrs. Clinton. Figuring out how that happened and trying to make sure it does not happen again is another, obvious matter of national interest.

We are looking forward to the Inspector General’s Report on the Department of Justice which is likely to focus on the overall behaviour of the department with respect to the Clinton emails and, perhaps, with the decisions surrounding the investigation of the IRS targeting of conservative groups. While the Nunes memo has been attacked as “partisan”, the IG’s report will not be vulnerable to such attack. It should be very interesting and should open up many avenues for Congressional Investigation.

My own view is that the “original sin” of the FBI/DOJ was the decision to ignore the clear wording of the law and find that there was a requirement for “intent” in the law regarding the handling of classified materials. This novel interpretation – apparently worked out by the FBI before it had actually done interviews with the principals involved in the Clinton email disaster – of the law allowed Mrs. Clinton and her people to avoid prosecution. In hindsight that corrupted the FBI in a profound way. The FBI should not interpret the law in any case, that is the DOJ’s responsibility. (The recusal of Mrs. Lynch after her tete a tete with Hilly’s husband needs to be looked into as well.) But if the FBI is stuck interpreting the law it needs to stick to the letter of the law rather than inventing requirements which the law does not contain. While it might have been shocking to see Mrs. Clinton charged it would have been less shocking than seeing the Director of the FBI contort the plain words of a law he is pledged to uphold. (I note that had Clinton and her aides been charged the matter would likely have been pled down to a misdemeanor level and life would carry on. Even with a guilty plea to a minor charge, Hilly would have been in better shape to explain her conduct to an electorate which would likely have forgiven it.)

Digging down to that “original sin” and the circumstances which surrounded will take some time. Time which will only be available if the Republicans can manage to hold at least the Senate and, ideally, the House. In the fevered imaginations of Democratic partisans, the Democratic party will win the House in November and begin impeachment proceedings as soon as a new House of Representatives has been seated. Which is why the SOTU speech and Trump’s overall performance is so important.

To get to the bottom of the Obama administration’s corruption of the justice system in the United States there needs to be a Republican House and Senate. Otherwise, the committees will be chaired by Democrats and all this will be swept thoroughly under the carpet. And for the Republicans to win they need a leader for their party. For better or worse, Trump is that leader and how he does and how he perceived to be doing is critically important. While Trump will never be treated fairly by the American mainstream media, he seems willing to end-run that media. Events like the SOTU give Trump the opportunity to be the President for all Americans. It also gives him the opportunity to underline what a partisan, sour and rather nasty bunch the Democrats actually are. He has nine months to close the sale with the American people. The Democratic Party is broke and in a state of civil war as the “woke” shoot up the “business Democrats” and Mrs. Clinton remains like a bad smell. The Trump tax cuts are about to kick in and the Atlanta Federal Reserve is forecasting 5.5% growth in Q1. American companies are bringing home their offshore billions and showing willing to hire Americans. The Democrats have locked their ankle to the DACA anchor and are seen as putting America last when it comes to immigration. And so on.

To win, Trump and the Republicans do not have to be brilliant, they simply have to be less stupid than the Democrats. Fortunately for Trump this is not difficult.

While we await the next sock to drop – and where is Sophie – the American political world is fixated on a 4 page memo which summarizes nefarious deeds by the FBI, DOJ and Lord knows who else. Who will be named? What did they do? Apparently, Trump is cool with releasing the memo with few, if any, redactions. The Democrats are calling for Chairman Nunes head because…well, stuff. The FBI is saying it leaves stuff out. The DOJ is claiming release would be reckless.

To be honest I am not expecting much. A bit of confirmation that the “dirty dossier” figured in FISA applications. Possibly a little more information on how the fix was put in to prevent Hilly from being charged. But that will be about it factually.

Which is not really the point. The point is that the Obama administration politicized the DOJ and the FBI. Once that is out with a bit of evidence to back it up, the wheels begin falling off both the Obama administration and the Hillary campaign. Which would not matter much in a normal transition; but the Trump transition was being undermined from the get go. How it was done and who did it matters a lot.

The memo is the first piece of a multi-piece operation. It will, I suspect, give grounds for the appointment of a special counsel to examine the conduct of the FBI and the DOJ vis a vis the Trump transition and the Hillary email decisions. It may not be enough. Enough will likely come with the report of the DOJ Inspector General who is looking into the behavior and the adherence to standards and norms of the DOJ and the FBI in these matters. The memo is a partisan document, the Inspector General’s report is deeply non-partisan.

My argument for voting for Trump – who I did not like going into the election and remain skeptical about now – was always that Hillary was a criminal surrounded by people who were either criminals or indifferent to the law. Trump, foolishly in my view, said he would not charge Hillary. However, as the facts emerge, I suspect it will be out of his hands.

The memo is going to bare certain facts. In themselves, they will be damning but they will also provide the base for further investigation. Those investigations will, gradually, reveal the full extent of the corruption which permeated the Obama White House and the Clintons in all their guises.

For the moment, the memo is knocking down FBI people like nine pins; but they are just the froth on the sewage. The bigger players, Lynch, Powers, Rice, Huma and a host of others need to be exposed, criminally charged and either pled out or sent to jail. The pleas will be interesting. Huma is a dead woman walking because she absolutely knew about the email traffic to Hilly’s “unauthorized” (and, hence, illegal) server. The other ladies unmasked or had quiet chats with Hilly’s husband when her plane happened to meet his.

This will all take a while but if Trump #freesthememo the first step will have been taken.